Problem with Starting Mobile Emulators in VS 2015

I'm still having a problem with starting phone emulators in VS2015. They were seemingly working fine at one point, but after several days of not using emulators, I went back to trying to use one and now get the following errors when attempting to run several of the universal window examples from Microsoft:

I also get an "Attempting to modify switch settings" warning message before the emulator fails to load.

Does anyone have any idea what is going on here?

What is your windows 10 version?

>>Error  Error : DEP6100 : The following unexpected error occurred during bootstrapping stage 'Connecting to the device 'A6BAF594-9315-40C3-AD16-F5B8A425A7AB'.':
SystemException - A method was called on an uninitialized object. DataReaderWriter.WindowsPhone

Like Rob's suggestion, please make sure that you install the latest emulators. Take device out of developer mode and back in. Put device in airplane mode before connecting, test it again.

Could you get useful information from Rob's suggestion?

Jack, I want to make it clear that I do not have an actual device connected to the program; I'm just trying to run the program in a phone emulator. Steve

I uninstalled all emulators, reinstalled Mobile emulator 10.0.10240.0 WVGA 4-inch 512 MB and get the same error messages as above. I used the Hyper-V Manager to start the emulator and still get the same errors. I don't know what else to do. These type of problems are what prevents developers from getting anywhere with Windows programming. I guess I will have to go back to Apple IOS programming where things work!

(1) Did you get any error when you install the VS? At least, we could know that whether it is the VS setup issue.

(2)Since it still has this issue in the Hyper-V manager, maybe it would be the Hyper-V issue or the windows itself. Do you test it in other machine?

Please make sure that you Environment meets the System Requirements for using the Microsoft Emulator for Windows 10 Mobile:
https://msdn.microsoft.com/en-us/library/windows/apps/Mt162269.aspx#system_requirements .

Please also check this link: Troubleshooting Hyper-V , so we could know that if this issue is caused by the Hyper-V.

I just installed update 1 for Visual Studio 2015 with the hopes that the update would solve the problem I described above, but I am still receiving the same error messages and the emulator will not run the program. I installed all of the options for the update, including all emulators

When the emulator first starts, the following message appears:

The emulator is changing the settings of the internal switch so that your emulator can function.

After saying OK to this, the emulator attempts to run, but a message then states that it cannot load its operating system.

I have started the Hyper-V manager and have manually started the emulator, but that does not help. I am trying to run one of the Microsoft Universal Sample Apps (ListView).

I feel with you. Got exactly the same problem as you, and find no solutions. Strange that Microsoft don't do it easier to be a Windows Phone App developer.

Could you tell me your really windows Environment? Is it the latest windows 10 10586?

Could you run the same app in other VS2015 machine?

In addition, did you save your project in the default folder like C:\Users\xxx\Documents\Visual Studio 2015\Projects?

Like snertingen's reply, since other members also got the same issue as yours, if possible, you can submit this feedback to Microsoft Connect feedback portal: http://connect.microsoft.com/VisualStudio/feedback/CreateFeedback.aspx,Microsoft engineers will evaluate them seriously. Thanks for your understanding.

I uninstalled VS2015 completely and reinstalled, taking about 6 hours total. Still having the same problem.

I also tried to run an Excel Add-in solution from the Office 365 web site (Task Pane Add-in Sample - Excel). This program ran fine on VS2015 before Update 1. Now, the sdk for this is apparently missing for the updated version, as the solution explorer shows that it is unavailable. There is a selection in the solution explorer to "Install Missing Features". When this is selected, the system attempts to run setup, but does not install the feature. Instead, an error message pops up telling you that you must close VS2015 to continue, but there is no "continue" button, so you can't close it and continue. It's a "Catch 22".

What a mess and hours of lost time!!!!

Maybe we would think about the VS setup, Please use http://aka.ms/vscollect  to gather the VS and .Net Frameowrk installation logs. After using it, you will find vslogs.cab from %temp% folder. Please upload the file to Onedrive and share the link here. I will help you analyze the setup log, at least, we could know that whether it is the setup issue.

Steve, I am having the exact same issue. I have tried VS2015 reinstall and Hyper-V reinstall. I have tried my project targeting 10586 and 10240 with the same error. Have you found a solution?

Here is the link to the vslogs files:

Please let me know what you find.

At some point prior to installing update 1 my system seemed to be working fine. The Windows Phone emulators worked and I had access to templates for Office add-in apps. Everything seemed to be completely functional. Then in late November, as reported above, the emulators quit functioning but everything else continued working. Then, after installing Update 1, the Office functionality ended and the Office templates completely disappeared from the New Project screen.

I have no idea what's going on!

>>At some point prior to installing update 1 my system seemed to be working fine. The Windows Phone emulators worked and I had access to templates for Office add-in apps. Everything seemed to be completely functional. Then in late November, as reported above, the emulators quit functioning but everything else continued working.

Do you mean that you have resolved the emulators issue? If so, would you please makr the helpful reply as the answer? So it would be helpful for other members who get the same issue as yours.

>> Then, after installing Update 1, the Office functionality ended and the Office templates completely disappeared from the New Project screen.

If possible, please repair your VS, please enable the office package: 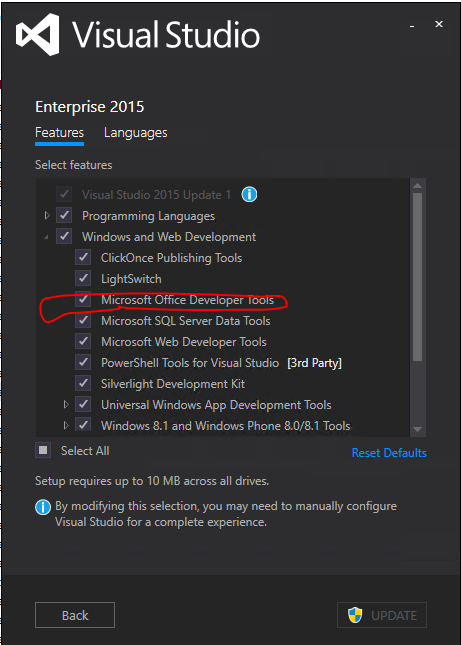 For this issue, if still no help, you know that one thread for one issue, if possible, please open a new case in our forum, I will follw up it.

I faced this same issue; for me, it turned out out to be a network-related problem, the vEthernet (Internal Ethernet Port Windows Phone Emulator Internal Switch) was disabled, for some reason or another. I re-enabled it and my emulator worked again.